You could cause a revolution through your speaking 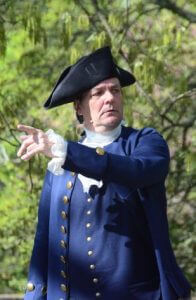 A few weeks ago, the family and I took in Colonial Williamsburg in Virginia. There is lots to do and see, but I was particularly intrigued with the “characters” who interact with modern visitors as though they were from the 18th century. I really enjoyed a 30-minute-or-so oration by “George Washington”. It was a persuasive speech — trying to get us to stand up and align ourselves against the tyranny of the British empire and their unfair taxation. It was entertaining, educational, and engaging. The man who played George was quite convincing, took questions from the audience with wit and wisdom — all while staying completely in character. Afterward, I engaged him in some 20th-century questioning, particularly about where he obtained his speaking skills.

Turns out he was a theater major, with 16 years experience at Williamsburg and EIGHT just as George Washington. He said he felt the folks in the town were all actors — they pretended to be someone they were not — but that was a specific application of more general skills that would be well-served in any forum. One of his quotes caught my attention quickly: “The truth of the matter is, you aren’t going to get hired here unless you have some sort of skill in public speaking.” While it’s obvious I would agree to the importance of public speaking skill, he drew the bar at HIRING, not excelling. Many of my clients are hired without the skills, but realize quickly that the path to excellence requires additional proficiency.

I’m hard-pressed to think of an area where exceptional public speaking is not an asset that gives a significant advantage over those who do not possess those skills. A quick inventory of my current clients bears this out: entrepreneurs who regularly pitch a product or service; technical employees asked to brief or inform decision-makers; executives giving updates to the “troops”; salespeople; ministry and non-profit personnel asking for money, change, support, or consideration.  All are benefited greatly from advanced skills in speaking.

Another point this fine orator displayed: Those who work at their craft get REALLY good at it.  Experts, even.  All it takes is effort.

Get the skills you need now so that they are present when you need them. You could even cause a revolution.