How to handle blunders and mistakes from the stage.

Anyone who has ever been on stage has had the fear of making a mistake.  And most of us have actually made mistakes.  Put our foot in our mouth.  Misspoken.  Said the wrong thing.  It’s part of being human.

But few have erred in as high stakes a setting as Steve Harvey at the Miss Universe pageant.  With the buildup and voice of a professional emcee, Mr. Harvey incorrectly announced Miss Colombia as the winner of the contest.  While the contestant, Miss Ariadna Gutierrez-Arévalo was reveling in the moment, Mr. Harvey had to come back on stage to correct his mistake.

“I have to apologize,” he began.  That’s a good place to start, and a nice segue to the social media frenzy that followed.

It’s not hard to see why the mistake was made (see card below — why is the font different for the winner?  And on a different side?).  Anyone could have done it.  But Mr. Harvey DID do it.  And he’ll live in YouTube infamy forever because of it.

What can we learn from the mistake? What should you do when a mistake is made on stage?  Wrong slide?  Mispronounce a word?  Trip over the power cord?  Forget your lines? We’ve covered this before.  You have a split second to decide.

And there are only three options.

In this case, you can’t forget it.  The real winner must be put on the pedestal.  Feature it means to draw attention to it. I reserve that option for when the situation affects the entire audience.  This is one of those cases.  So he has to fix it.  And he should feature it.  Which he did.  It’s hard to imagine a better recovery (there isn’t a good one, so better here is relative) than Mr. Harvey came up with.  His years of training as a standup comedian help.

But for the rest of us, a quick checklist can save the day.  Fix it?  If you can, fix it.  Can’t fix it? Then decide if it affects everyone in the audience.  Yes? Feature it.  No?  Forget it.

I was teaching about 65 folks in a packed hotel ballroom.  The room next door, separated by only a thin divider, was also packed.  Right in the middle of my talk, a trumpet blared next door and their group began singing – quite loudly – God Bless America.  I can’t fix it.  For the next 60 seconds, everyone will be affected.  One thing to do.  I said, “Folks, I think we know the words.  Let’s make sure we sing louder than they do!”  And my group rang out with gusto.  It was a light moment, brought us together, and created a lot of interaction at the next break when the other group thanked us for joining in. The checklist told me what to do.

You’re nervous.  You can’t fix it.  It only affects you.  So forget it.

A cell phone goes off.  You can’t fix it.  Everyone may hear it, but it doesn’t affect them.  So forget it.

A door is open and a noise outside the room is louder than you are.  Maybe you can fix it.

Here’s an infographic with a Checklist for handling unexpected issues when you’re on stage speaking: 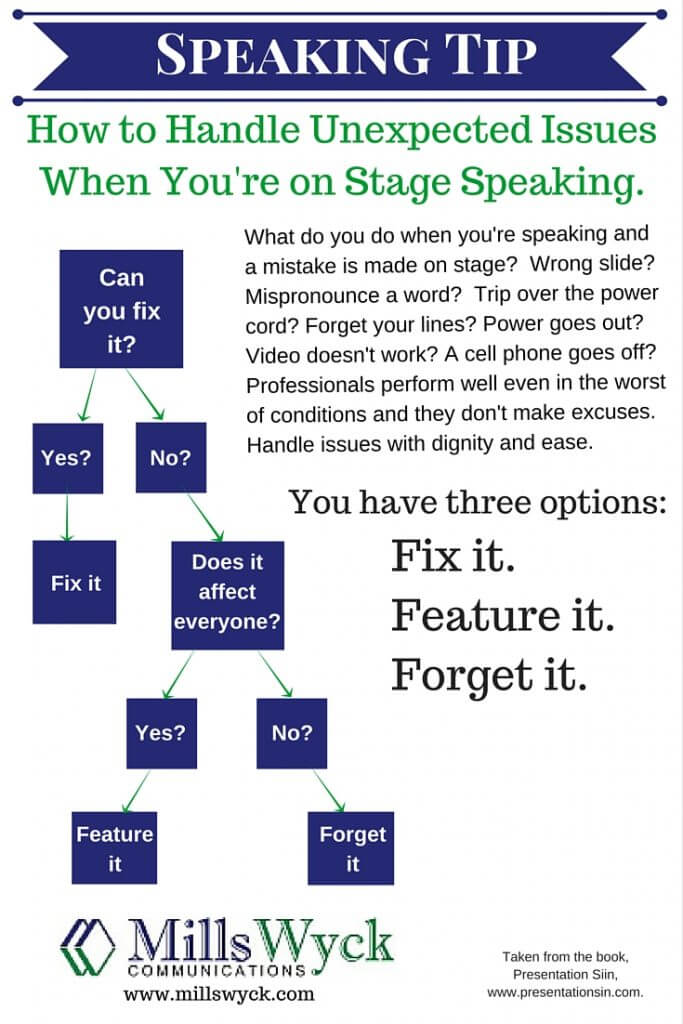 Communication matters.  What are you saying?

This article was published in the January 2016 edition of our monthly speaking tips email, Communication Matters.  Have speaking tips like these delivered straight to your inbox every month. Sign up today and receive our FREE download, “Twelve Tips that will Save You from Making a Bad Presentation.”  You can unsubscribe at any time.