Much of what I find myself doing as a speech coach is falling more into the mentorship category than the instructing category. I recently got an idea from a client.  He had called to discuss hiring me to speak to his staff, something I’ve done several times for his organization.  At the close of the conversation, he asked about one of his employees.  “He’s someone we’ve targeted to be a key part of our future.  He’s incredibly reliable and capable.  But his new responsibilities will put him in front of customers.  A lot.  We’re not sure he’s ready for the spotlight and he has voiced some reservations about his public-facing skills.  Do you think he can do it?”

With no other background and no time to prepare, it sure felt like a loaded question.  Sometimes I’m amazed at my response to questions like this.  The answers seem to be moments of enlightenment and I wish I could have them recorded for later.  Other times… well, let’s just say I often wish I could play a do-over card.

But in this case, I loved my impromptu response.  “If this is an issue about his skills – those can be taught.  To anyone.  And I’m your guy.  But if this is an issue about self-worth and leadership, then I think that should be mentored and investigated within your organization, and most notably from you.  Have you talked to him directly about how you feel and what you’re thinking?”

There was a long pause.  Finally, he concluded: “I should mentor him internally.”  I agreed.

I believe that mentorship is a key ingredient to growing any organization (or person) and making it last.  I also observe that it is missing in most organizations.  Virtually every great speaker I’ve had a chance to interview has said a mentor/coach was the key to getting them prepared for the big stage.

Most of the people I’ve run into that were fantastic speakers/communicators revealed when pressed that a mentor/coach was key in getting them prepared for the big stage.  Someone took the time – rarely as part of a training program – to educate and rub off the skills, motivation, and confidence to achieve something they could not do on their own..

There are volumes written on mentorship, just like there are on speaking.  And that’s the problem.  Mentorship (and speaking) are not something to learn from a book.

There is SO MUCH MORE.  But much of what I find myself doing as a speech coach is falling in the mentoring category more than the instructing category.  In the last few months, I’ve had multiple clients walking towards a professional speaking career.  It’s not enough to tell them what has to happen, it’s a process of getting them to define and decide and do.

Who in your world could lead you to where you want to be by being your mentor/coach?

Who in your world needs you as a mentor/coach?

It all starts with a decision. 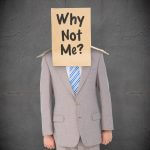 That client phone conversation birthed an idea in me.  Coupled with my roll-the-tens-digit birthday (read my thoughts on turning 50 here), I thought, “Why not me?  Why shouldn’t I be a mentor to those I have influence with?”  Since my Christian faith is the driving force behind whatever I do, it seemed natural to merge that in as well.

But I immediately came up with answers to my “Why not me?” query.  Lack of time.  I don’t have my act together.  I don’t have a program.  I was never mentored.  I wouldn’t be good at it.  No one would value it.

One by one, my excuses were explained away.  I had another client who had been through a mentoring program.  I got connected to his mentor.  Suddenly I had advice, a curriculum, and a system to mimic.  I heard my own advice to multiple friends and clients: “We make time for what’s important to us.”  I reached out to my network and found there were lots of links to young(er) men.

In January I started my mentoring pilot with four men I’d never known before.  It has been one of the most rewarding and exciting things I have ever done.  I’ve met four delightful new friends.  We studied life, grace, family, character, purpose, and money.  I’ve gotten a chance to grow myself more into the man I want to be.  I’ve been held accountable to do the small things.  And I’ve discovered purpose and meaning beyond what I normally get through my vocation.

I’ve decided to run another program this year.  But I’m again facing doubts.  How will I get a new crop of wiling mentees?  Will they be as good as the first group?  Do I have the energy to sustain this?  But I remind myself of the principles in my newest keynote: The Four Questions.  And the answers to those questions drive purpose and provide motivation.

I’m trusting my network.  If you know men, aged 25-40, in the Raleigh area, who are serious about tangibly living a Christian life, then have them contact me.  They should be married, with or without kids that are not yet in high school, and be committed to living life transparently and passionately for a year that will change the rest of their life. We meet once a month September-June. Who do you know that could benefit from such a faith-based mentorship program?

Communication matters, what are YOU saying?

This article was published in the August edition of our monthly speaking tips email newsletter, Communication Matters. Have speaking tips like these delivered straight to your inbox every month. Sign up today to receive our newsletter and receive our FREE eBook, “Twelve Tips that will Save You from Making a Bad Presentation.”  You can unsubscribe at any time.